However, many authorities hold that this exemption is inapplicable to the first night of Sukkot, and therefore there would be an obligation to eat at least a “kezayis” (an “olive’s worth” or approximately one fluid ounce) worth of bread in the Sukkah on the first night of Sukkot even if it is raining. According to this opinion, it would have even been permissible to recite the blessing of “Leishev B’Sukkah” in the rain during the first night. Others, however, disagree and hold that the exemption of “mitztaer” is applicable to the first night as well and therefore one would not have to eat in the Sukkah at all during the rain and certainly should not recite the blessing of “Leishev B’Sukkah.”

Due to the lack of resolution of this question, rain on the first night presents a special challenge. Therefore, it is appropriate to wait an hour or two (others hold until close to halakhic midnight, but that is not the custom) for the rain to stop before beginning the meal. If the rain does not stop within this time frame, then Kiddush should be made in the Sukkah together with the brocha of Shehecheyanu (but without the recitation of the blessing of “Leishev BaSukah”), followed by Hamotzi in the Sukkah and the eating of a “kezayis” of bread. However, if a person has hungry guests or members of the household who would have difficulty waiting, it would be permissible to make Kiddush with the brocha of Shehecheyanu (but without Leishev B’Sukkah) and Hamotzi right away in the Sukkah if the rain is not imminently coming to an end. It is legitimate in our opinion to rely upon this approach even in the case of a normal family that does not have guests whenever it would otherwise cause friction or undue distress.

If it is still raining, the rest of the meal can be eaten in the house, but if it stops raining afterwards, one should return to the Sukkah to eat a “Ke’Beitzah v’Od” (the volume of “more than an egg” or slightly more than two fluid ounces) worth of bread and make the blessing of Leishev B’Sukkah at that time. If one already went to sleep when it stopped raining, most authorities hold that it is not necessary to return to the Sukkah to eat more bread and make the “Leishev B’Sukkah” blessing, but some authorities, such as the Vilna Gaon, feel that it would be appropriate to force oneself to return to the Sukkah at any point during the night when it stops raining. The brocha of Shehecheyanu does not need to be repeated at the time of reciting “Leishev B’Sukkah.” 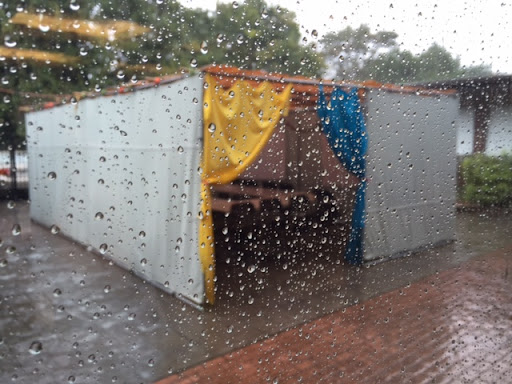 On both nights, if it appears that the rain is about to start when one returns from shul, it is important to recite Kiddush in the Sukkah quickly (with both “Leishev B’Sukkah” and Shehecheyanu), and then to wash quickly, make Hamotzi and eat a “kezayis” of bread quickly before the rain starts to come down. While it is ideally recommended this year (5782) to wait before making Kiddush until 7:41 pm on the first night, and 7:39 on the second night, it is recommended in the case of impending rain to recite Kiddush in the Sukkah as early as 7:32 pm on the first night, or 7:30 pm on the second night (for residents of Chicago).

All these restrictions and requirements only apply to men. Women, who are not strictly required by halacha to eat in the Sukkah, do not need to observe any of these waiting periods, and do not need to return to the Sukkah when it stops raining afterwards, although they are of course welcome to do so.

It is our fervent hope that we should merit to observe the mitzvah of sitting in the Sukkah in splendid and superior fashion during this upcoming holiday in good health!

Chag Sameach to all.