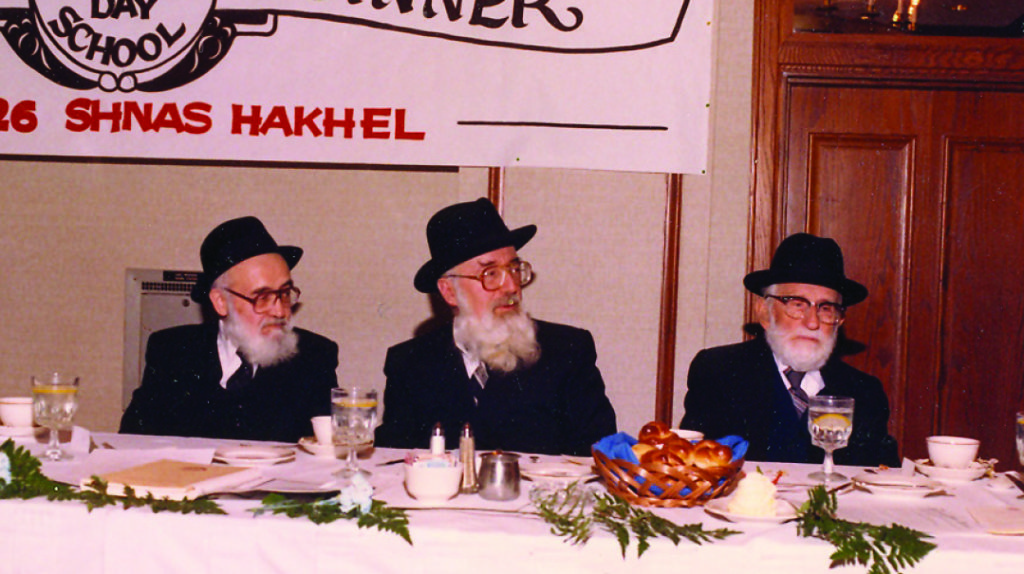 When putting pen to paper, I am challenged to properly express the greatness of Rav Gedalia Dov Schwartz, longtime rosh beis din at the Chicago Rabbinical Council (the cRc, where I am kashrus administrator) as well as at the Beth Din of America.

In interactions with him, he gave the impression of a European-born gadol, steeped in the great Lithuanian yeshivos. But the truth was that he finished public high school in Newark and graduated from RIETS with a French Prize.

So where did he come from, and how did he become a major talmid chacham who was intimately familiar with every nook and cranny of Torah?

I suppose it began with his rebbeim, whose waters he drank deeply.

He would always speak especially fondly of his first rebbi, Rav Yaakov Ben Zion HaKohein Mendelson, who was the chief rabbi of Newark. A musmach of the Rogatchover Gaon, Rav Mendelson was a force to be reckoned with, a strong leader who founded many communal institutions in what was then a major Jewish community. Rav Mendelson recognized the potential in young Gedalia Dov, and the two learned Gemara, halachah, and mussar for two hours every day until the rav’s passing in 1941.

After graduating high school, Rav Schwartz crossed the Hudson to learn at RIETS at Yeshiva University. As World War II was raging at the time, he should have theoretically been exempt from the draft, since he was a full-time “seminary student.” But the three-member draft board, all of whom were Jewish, had never heard of a Jewish seminary and did not believe that he was truly learning full-time.

In the end, after several appeals, he was required to appear before a panel of rabbanim in Newark.

To prepare for the exam, Rav Schwartz reviewed the devar Torah he had recently given in honor of his siyum on Gittin, and brought along a copy of the Yiddish speech he had given at his bar mitzvah.

To his delight, the panel consisted of two rabbanim he knew well: Rav Yitzchok Greenblatt, the rav of the Brisker shul, and Rav Hirsch Leib Kahana from Tzefas, who was a gifted speaker.

After they “spoke in learning” and determined that the young man was more than qualified as a yeshivah student, he was dismissed and free to devote himself to Torah.

Atrue Litvak (his grandfather had learned in Volozhin and was a close friend of Rav Shimon Shkop), Rav Schwartz was deeply influenced by Rabbi Moshe Shatzkes (the Lomzher Rav), Rav Dovid Lifshitz (the Suvalker Rav), and Rav Soloveitchik, all of whom he learned from while in RIETS.

He was equally comfortable and had a warm relationship with Rav Aharon Kotler, who wrote a haskamah for his first sefer, Divrei Regesh, in 1959.

Before issuing his approval, Rav Aharon asked that the galleys be brought to his home study in Boro Park, as opposed to his yeshivah office in Lakewood, since in Lakewood he was fully engrossed in yeshivah matters and had no time for anything else.

Rav Schwartz recalled that Rav Aharon had two phones in his office, and throughout their meetings, he was frequently interrupted, answering questions on how to get Yidden out of Europe.

After his marriage to Shoshana Poupko, Rav Schwartz learned much by observing and conversing with his father-in-law, Rabbi Eliezer Poupko (the Velizher Rav) of Philadelphia.

Yet more than anything, he was a product of his own hard work, his gifted memory, and an immense dose of siyata d’Shmaya.

He possessed a near-photographic memory and could quote obscure teshuvah seforim nearly verbatim. And then he would invariably garnish the quote with biographical tidbits regarding the mechaber and other pertinent information about the sefer.

A leader of what can be termed “centrist Orthodoxy,” Rav Schwartz was firm in defending his positions and had no problem leaving a pulpit or walking away from an opportunity when he felt that bending to the whims of the balabatim would force him to compromise his principles. This was part of the reason he left positions in Providence and Park Slope, before going on to serve in Toms River and then Philadelphia. Ultimately, he settled in as the rav of Young Israel of Boro Park, where he served for two decades.

Drawing strength from Torah and halachah, he remained unbending and strong even as popular attitudes and movements attempted to make inroads into Orthodoxy. Yet at the same time, he was a gentleman of the highest order who would treat everyone with dignity and make everyone, even someone he needed to chide or disagree with, feel good about their interactions with him.

I saw this when I accompanied him to visit a shlacht hoiz belonging to a crusty old individual, whom I had written off as a crank. As soon as Rav Schwartz greeted him, the man just melted and reveled in the Rav’s attention, recognizing his emes and compassion.

This same quality came to the fore in the beis din, where non-Orthodox couples coming for divorces were often interacting with rabbanim for the only time in their lives. In Rav Schwartz’s presence, their visit to the beis din was transformed from a frightening ordeal into a positive experience.

Mrs. Biranit Cohen, who then served as an administrative assistant at the cRc, recalled an instance of a woman coming in to receive her get.

“She was very opposed to the entire process, feeling that the whole thing was antiquated,” said Mrs. Cohen. “She shouted at the Rav, and she even grabbed her file out of his hand at one point. But the Rav remained — at least outwardly — completely calm. He never raised his voice to her, although he did speak to her sternly. But he understood that she was taking several frustrations — some unrelated to the get — out on him, and in the end, the get was completed.”

Indeed, he lived all aspects of his life that way, treating everyone from family to children in shul with tremendous consideration.

Rav Schwartz’s expertise extended to all areas, ranging from language to mechanics to animal husbandry and chemistry. Thus, when deciding how a name should be spelled in a get, he drew upon his knowledge of Greek and Latin. When determining the cRc’s standards for kashering commercial equipment, his understanding of how machines worked was invaluable. And when answering a difficult sh’eilah in treifos, he was speaking about a reality he understood on several levels.

Every psak of his was crystal clear, thought out, and imminently practical.

In addition to being blessed with teachers of the highest caliber, he was firmly rooted in the mesorah he had learned from his parents, Rav Avrohom and Pearl Schwartz.

He recalled to me that his mother used to make a certain sour dish every Pesach. When he later went to yeshivah, he learned from Rav Mendel Zaks that the Chofetz Chaim was particular that pickles be made (not from vinegar) every Pesach to demonstrate that although we avoid chametz, we do not avoid chometz, sour foods. This was to negate the beliefs of the Kara’im, who distorted the Torah to mean that all sour foods were forbidden on Pesach.

Rav Schwartz would often quote another directive from the Chofetz Chaim, that it was imperative that bnei Torah learn to be public speakers, to be able to advocate for Torah Judaism with eloquence and force.

“We need to serve Klal Yisrael as orators,” he would say time and time again.

Over the three decades of his leadership, the Orthodox community of Chicago has evolved. The yeshivish and chassidish sectors have grown tremendously, and the center has shifted rightward. Yet, led by Rav Schwartz, there is respect, cooperation, and mutual reverence between the various communities and their manhigim. This can be credited in large part to Rav Schwartz, who worked with everyone hand-in-hand, honoring and accommodating every group.

I personally watched with awe how he interacted with my rebbi, the Telzer Rosh Yeshivah, Rabbi Avrohom Chaim Levin. They did not agree on everything, but they worked together on everything, including being part of two batei dinim that dealt with the most sensitive of issues, get refusal (agunos) and molestation. They swept nothing under the rug, and resolutely and bravely did what it took to protect the most vulnerable among us.

It goes without saying that Rav Schwartz was a classic masmid, who was rarely seen not learning. My colleague Rav Zev Shandalov related to me that soon after he became rav of Kehilath Jacob Beth Samuel, he once lamented to the Rav that as a rabbi of a burgeoning congregation, he rarely had learned lishmah, not preparing for a class or a lecture. “He banged his hand on the table — not real hard — and said, ‘There is no such thing as a rav who does not sit and learn for himself.’ It was the only time I saw him get upset, and it changed everything for me.”

Rav Schwartz loved learning, and he loved writing his chiddushim, which formed the basis of his seforim. In fact, in his eighties, when he scaled back some of his beis din duties, he spoke of how excited he was to be able to write more. Even after he suffered a stroke at the age of 91, he expressed how he was looking forward to returning to the office so he could write, learn, and teach as before.

One of the saddest days I can recall was when I visited him at his bedside and he did not recall something in Torah. For Rav Schwartz not to remember something was simply unthinkable. He knew kol haTorah kulah, and was one with Torah with his every fiber.

As we recall Rav Schwartz as a gadol, a manhig, a gaon, and a glorious link in our mesorah, I would conclude with the words I heard from him on numerous occasions: “I’m not concerned what people say about me, as long as they say I was a gentleman.”